He is a director and photographer, writes screenplays and above all loves to tell stories in pictures. On the film side, he talks about Coppola, Kubrick, Paul Thomas Anderson and Wong Kar Wai, to name but a few. In photography, his "fathers" could be Bourdin and Newton, or more recently Norman Parkinson. Although he works for brands such as Louboutin or Givenchy, he only finds his balance by being equally free to create for himself, on the subtle rhythm of a precise and poetic narrative of his own.

She is an artist body and soul, an evidence which accompanies her since her childhood. Her relationship to creation is instinctive and does not follow any pattern or rule. Happy autodidact, it is through curiosity, work and experimentation that she develops her aesthetic and sensitive language. It is about forms, materials, emotions and vision...recently, it is also about meeting, even confluence, with the sculptor Guy Bareff. Together, they imagine creations without restrictions of techniques, which they call "rendez-vous" to evoke the blossoming brought about by the intertwining of their universes.

For Sessùn, Martin and Elsa sought to explore the play between the artist and the act of creation. This often permeable relationship between object and subject. A metaphor with the garment as a body, magnified by a personality. The backdrop is the studio they set up in Hyères, which they call "La Casita", and from where they talk to us about their complementary differences, their spaces and what touches them. A luminous and sensitive coexistence.

Who are you, what's your background?
M: My name is Martin Aleman, I'm 28 years old, I'm a director and photographer. I live between Paris and the South where I created my photo studio. I moved from Montpellier to Paris nine years ago to start an acting career and little by little I started writing screenplays. From there I moved on to directing, first my own short films, then music videos and finally fashion films. I've always loved photography, I used to do a lot of it when I was travelling and since a few years I decided to get into fashion photography, while keeping my job as a director.
E: My name is Elsa Oudshoorn, I am a painter and visual artist. I live in the south of France where I have my workshop. I started working very early. When I was 16 years old I stopped school and moved to Milan where I started my modeling career which I pursued for almost 10 years. But besides, and this since my youngest age, I never stopped painting, sculpting, creating... That's what made me the happiest, so three years ago I decided to devote myself only to art.
How do you work together?
M & E: We're fortunate to share a workshop, our two creative spaces are simply separated by a big door, so whenever either of us needs help, advice, all you have to do is call. It allows you to always have an immediate outside view and it's really comfortable because it avoids having certainties! We got the easy critic! 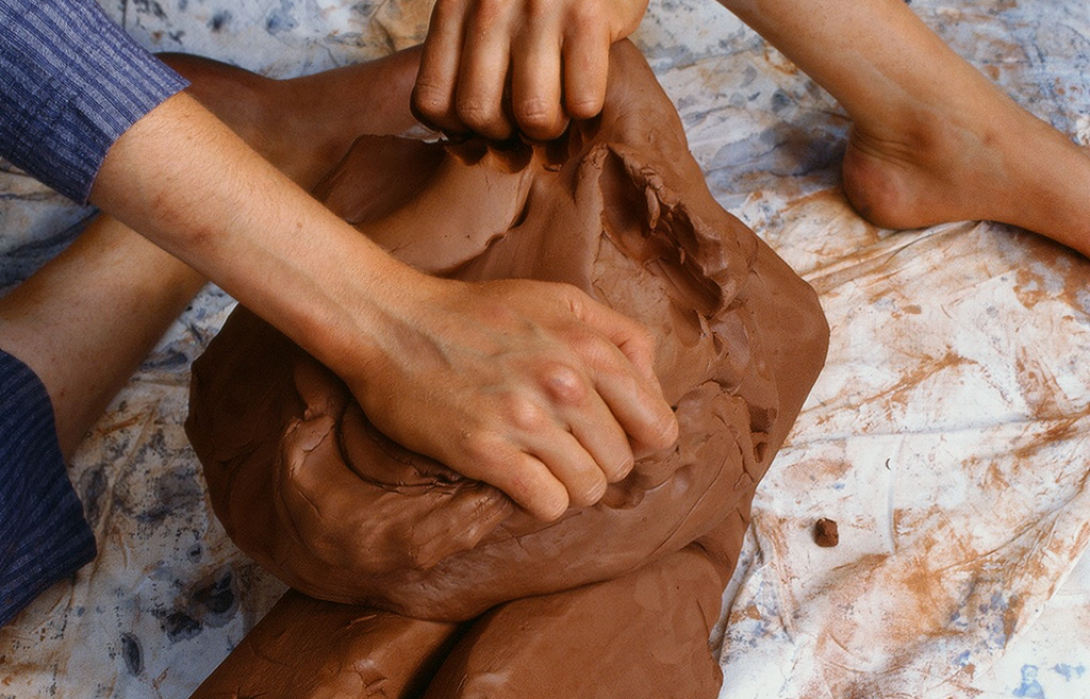 What are your inspirations?
M: What inspires me the most is cinema. My imagination was formed by the thousands of hours I spent watching movies. I still rave about the genius of some directors, it's still the only art that binds all the others together. It is necessary to master the photo, the direction of actor, the writing, the decoration, the costumes and finally the music ...
E: I think that what inspires me the most is first of all the environment in which I grew up, the Mediterranean Sea and its intense blue, the design of the cliffs falling into the sea and the strength that it gives off. The rainbow of colours and materials that make up each creek, from the red rocks to the finest sand ...
You're based in Hyères and set up your studio there, does the south play an important role in your creative process?
M: I remember leaving Montpellier for Paris almost nine years ago to emancipate myself as an artist, and nine years later it's in the south that I'm slowly finding my freedom. The creation of this studio gives me the right to make mistakes and it's a luxury that it's unfortunately not so much possible to have in Paris today.
E: As I said, I draw most of my inspiration from my environment, so yes it is very important in my creative process. I would even say that without him my creations would surely be very different. And the beauty of the landscape soothes me, I feel safe here, a little far from everything.
How would you define each other?
M: An instinct of genius at the service of golden hands!
E: No limits. Only creativity and dreams come first.
What are your projects / news?
M: I'm exhibiting a series of photos in Arles at the end of the month, which will remain in place all summer. I dress a place in the heart of the city and an industrial wasteland of portraits in XXL prints. At the same time, I'm preparing the shooting of a short film for this autumn.
E: I am currently preparing my joint exhibition with Guy Bareff at the Villa Benkemoun next October. And there's a lot of work!
What is your relationship to contemporary art?
M: As a simple spectator, what I like and what inspires me in contemporary art is more the often counter-current creative path, this quasi-punk approach, than the creations themselves. The fathers of the contemporary in painting, sculpture, photography, architecture, cinema and so on, were all anti-conformists and it attracts me to understand why.
E: To be honest, I don't know, I'm a bit lost with contemporary, classical... I never really asked myself that question.I have often been asked if what I do is contemporary art, but I have never been able to answer.
Describe your ideal day...
M: A good coffee in the sun to wake up before joining the team on the set that finalizes the settings of lights, decoration, frame. Then start the engine or press the shutter release. Finally, to end up at the restaurant to have dinner with my friends and talk loudly!
E: I think it's a day where I'm at my studio without any pressure of timing or anything else? Just me and my dreams against a backdrop of Massive Attack! In a bubble where I'm completely disconnected.

What is your relationship to fashion?
M: Familial. I grew up in a family where everyone works in fashion, from second-hand clothes to ready-to-wear to magazine covers! I am particularly attentive and sensitive to this. I think it's still one of my greatest sources of inspiration!
E: I like fashion in that it allows people to assert their personality, to assume their difference on a daily basis without having to hold up a sign. Personally, I have a rather pragmatic use for it because I wear a lot of work clothes, so rather robust, raw but alive.
If you had to describe Sessùn in a few words...
M: Familial, sweet, memories. Mineral, artisanal and sunny.
E: Simplicity and softness.
What's your latest artistic crush?
M: The photographic work of Harry Gruyaert.
E: The sculptures of John Balistreri.

To find out more about Elsa & Martin's work, click here: 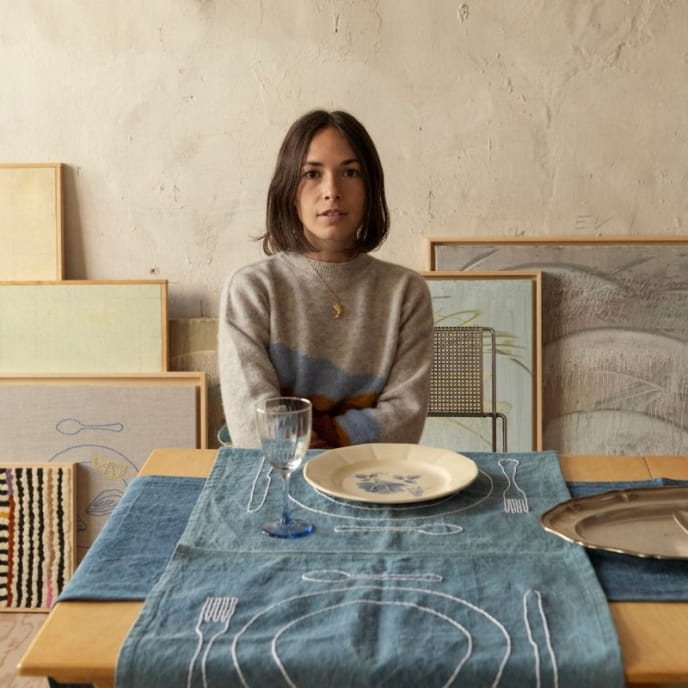 Beautiful People
Sarah Espeute
On the occasion of our collaboration with the artist Sarah Espeute, we met her in her studio in Marseille.
Read more

Beautiful People
Sarah Espeute
On the occasion of our collaboration with the artist Sarah Espeute, we met her in her studio in Marseille.
Read more 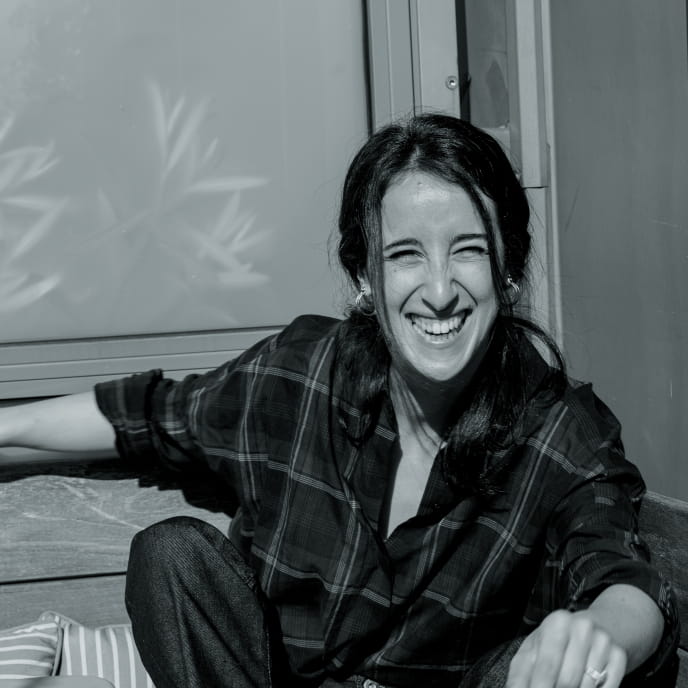 we have few things to tell you

Sign up to Sessùn's newsletter and discover the brand's news.

Newsletter
We have a few things to tell you
Sign up to Sessùn's newsletter and discover the brand's news.
By signing up to the newsletter you are accepting our Terms & Conditions and our Privacy